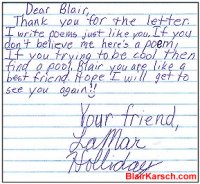 Dear Blair, Thank you for the letter. I write poems just like you. If you don’t believe me here’s a poem, If you trying to be cool then find a pool. Blair you are like a best friend. Hope I will get to see you again!! Your friend, Lamar Holliday 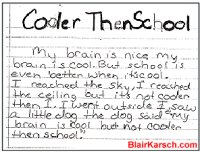 Mr. Blair Mr. Blair is cool and hes class he writes all day long but doesn’t know how long it last. He’s hip he’s hope he’s down right bad. He doesn’t know bad he can walk the walk and talk the talk and makes everybody cool that’s why we like him at our school!! By Diana Michelle Shepard 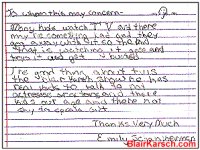 To whom this may concern – Many kids watch TV and there may be something bad and they go away with is so the bad that is watching it goes and tries it and gets busted. The good thing about this the blair Karsch show he has real kids to talk to not actresses or actors and these kids our age and there not shy to speak out. Thanks very much Emily... 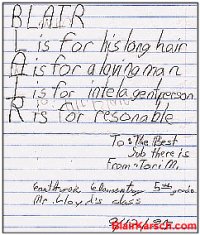 BLAIR L is for his long hair A is for a loving man I is for intelagent person R is for resonable To: The Best Sub there is From: Tori M. Eastbrook Elementary 5th grade Mr. Lloyd’s class 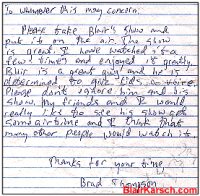 To whomever this may concern. Please take Blair’s show and put it on the air. The show is great. I have watched it a few times and enjoyed it greatly. Blair is a great guy and he is determined to give kids a voice. Please don’t ignore him and his show. My friends and I would really like to see his show get some airtime and I think that many other people would watch it. Thanks for your time, Brad...